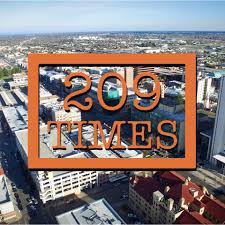 For some, 209 Times has become their defacto news outlet and has become a credible alternative news site. Yet, just like the alt right media sources that Donald Trump and his extremist supporters believe and follow, 209 Times uses racism, sexism, homophobia and personal attacks as tools to further their political agenda. It is not a credible news outlet and until its shutdown, people need to treat everything that is shared with a grain of salt. So how did we get here?

209 Times very intentionally started by sharing links to local news. Kind of a huffpost/yahoo news aggregator for Stockton. This is how they built their following. It’s the Fox News model. Then, just like Fox News did with national political leaders, 209 Times interjected local political thought pieces. The majority of these pieces attacked local progressive leaders of color and or LGBT+ leaders. Ever think why that is? Or ask yourself, why is the leader of 209 Times, a former Bernie Sanders delegate continually attacking progressive policies that these leaders of color advocate for? Or why is he always endorsing local Republicans over local Democrats? Could it be to placate the funders of 209 Times?

A legitimate news source would double check their sources of news. Just last week, they came out with an article attacking Mayor Michael Tubbs for working "full-time for Michael Bloomberg". Now, how about instead of posting fake news, why doesn't someone just call up Tubbs and ask first? 209 Times published lies about me fleeing the country and embezzling money from the Pride Center. The truth was, I flew out to Spokane to see my niece graduate high school. During that time I took calls from press, elected officials, and community leaders to field questions regarding my departure. Of those calls not one was from 209 Times, yet at the end of the day they seemed to have the most to say about this news. That's why you need to treat the things 209 Times posts with a grain of salt because unless its an article being shared from a credible news outlet, you can't really trust what's being said.

We all know that Stockton is a big small town. Our representatives perform their duty with the understanding that they also have to pay their bills and are also, just another citizen with a business or other work out there that depends on them. With that in mind why write an article attacking Tubbs? Why not also point out that Mayor Silva worked for Boys & Girls Club and, Mayor Johnston owned and managed The Ballonery from a far. Even Mayor Chavez served on numerous community boards. Selective memory is the herald of dishonesty. Leaders, especially in smaller cities, have to juggle numerous responsibilities that include business, boards, children, and spouses.Tubbs has endorsed and is supporting Bloomberg. Each of us has their own opinion on that, and by many counts most of us are still determining what that means to us.Stockton is a factor in a presidential race. The last time you could say that was in 1992, when (Rep. John Garamendi was Bill Clinton's 1992 Campaign Chair, and that instance is a very different story because of who Garamendi and Tubbs are, and the respective privileges each of them has.Our mayor is advising someone who may potentially be the President in a year. That equates to a better understanding of communities like ours on a national level. Why any Stocktonian would complain about that is a mystery to me.

In the United States today we expect our leaders to be flawless. Perfect. I feel that a substantial part of the reason we go through leaders so quickly is because they are humans, and therefore not perfect and not up to our impossible standards. And let’s be honest, many of us wait with bated breath for that moment of schadenfreude in which the successful among us fail. I believe this has a great deal to do with our current President’s popularity, as I feel we can all agree that he is a factory for mistakes.

This is all to say that leaders make mistakes, but mistakes do not always equate to failure. I am a leader, and like every other leader in the existence of all things, I have made mistakes. That makes me no different from any of our community leaders on either side of the aisle. That is what progress looks like - a series of mistakes and victories. All we get to decide is what directions those mistakes and failures take us in. I can attest from personal experience that forming the Pride Center in Stockton and getting it to the place of success it now enjoys looked like the people before me making mistakes, and then me learning from that and making my own. Moving forward I hope it will continue with the person after me learning from my mistakes and making their own, because at the end of the day that will mean there is a Pride Center in Stockton, Ca, and that I have succeeded.

It is because of this idea that we are left with a choice to make about our leadership and how we engage them. We must determine where we will place the time and energy we are afforded. Will we expend it trying to destroy what we all know will be imperfect, always, regardless of what it looks like? Or will we instead use our time to focus on what has been accomplished and what can be learned. We are all, each one of us, both an exemplar and a cautionary tale eventually, all depending on the moment and the decision we’re looking at. What determines if we and our society progresses during our lifetime is what we choose to do with our collective faults and successes. So, choose your news source, but realize that by choosing it, you are also choosing our direction.