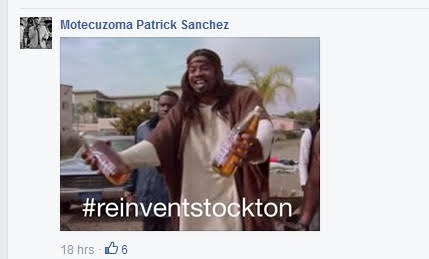 I first want to start by pointing out that an individual does not have to be racist to use racist tropes for their own political advantages. Donald Trump has elevated this art form all the way to the White House. Ambition often gives way to desperation, and unfortunately Motec Sanchez and 209 Times have embraced this nasty behavior that ultimately contributes to the further divide between brown and black folks in Stockton. At the end of the day it’s the parabolic exchange of short term gains for long-term damage that is sometimes common in politics.

It started with Motec Sanchez posting a picture of a black Jesus holding two forties and captioning it "Reinvent Stockton" which led to a public smackdown from NAACP Leader Bobby Bivens who declared Motec's actions were racist. (You can revisit that drama here.) More recently, 209 Times Contributor Doug Vigil posted a disgusting video from Voices of Stockton where he made racist remarks towards City Council Candidate Kimberly Warmsley. In between these two incidents, Motec has kept himself busy with rhetoric that shouldn't be tolerated by anyone. Here are a couple examples:

Short term gains in way of besmirching positive events happening on his rival’s watch for the long-term damage of defacing cultural pride. We've seen this type of rhetoric time and time again. From the Willy Horton ads to "Welfare Queen" speeches to 209 Times calling Elbert Holman an Uncle Tom, usually this type of language is used by white conservatives. Outside of quick and dirty political points why is 209 Times and Motec Sanchez using these tactics? Colonialism.

Stockton and San Joaquin County have a long history of saboteurs being recruited by the elite to keep people of color from gaining or maintaining power. In the 80's and 90's Republican operatives would look over voter files and call individuals with "Mexican" looking names and encourage them to run for public office with the interest of diluting the minority vote. CalMatters just wrote a piece about the latest example of this. People of color recruited to work against the best interests of their own communities.

Dividing your opponents so they cannot unite to overcome you is another tactic we’ve seen in our county. It is the very tactic that the farm workers movement dismantled for the LatinX and Filipino immigrants of that era. If black folks and brown folks hate each other, than they won't work together to solve the shared challenges their communities face---leaving our city stagnate.  I find it ironic that Motec would attack the term LatinX. The term did not come from a Eurocentric background but from the social justice movement where the ethnically diverse leaders wanted to honor their gender non-conforming siblings and they created a term that celebrated diversity and inclusion. Yet, of course, an individual who has a history of using homophobic attacks would oppose inclusion. Especially if it potentially damages the work done by his rivals, which I am numbered among. Is Motec intolerant of the LGBT+ community? Possibly. But it also could simply be more short-term gains in exchange for long-term damage; damaging an opponent at the cost of empowering bigotry.

Our collective history is sprinkled with wisdom pertaining to power and how it shapes us. Robert Ingersoll once wrote (about President Lincoln, although the quote is often ironically attributed to Lincoln), “If you want to find out what a man is to the bottom, give him power.” “Power tends to corrupt and absolute power corrupts absolutely” has become perennial sage advice. If I could add an addendum to this it would be that it is not only power, but the pursuit of power that undermines the character of lesser people. If we as a city are ever going to overcome our challenges, we are going to have to learn from our history and stop allowing the same mistakes to happen. We need to call out the saboteurs and opportunist who would rather lend to the destruction of our community than elevate it--all for their personal and fleeting gains. Demand that Motec Sanchez and 209 Times disclose who funds their operations. Demand transparency! Demand accountability!