Home Archives Profile Subscribe
How the California Dem Party is Already Failing its LGBT+ Community
As the next generation of leaders come of age, what is the best way to get them involved?

The Trouble With Fugazi

With the Sawyer/Silva/Fugazi campaigners dropping off leaflets, with Fugazi attacking our local Stonewall Club and with her supporters attacking 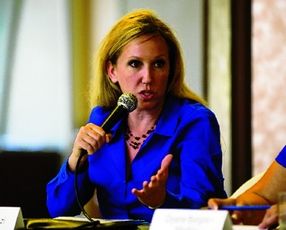 Mayor Tubbs for getting married, the 2018 election season has officially kicked off. Allen Sawyer and Anthony Silva have hitched their last grasp for political relevance on the Fugazi Train. Because the passing of time can fog the best of our memories, a lot of people are forgetting some critical situations that occurred and it is my hope that we can have a healthy discussion about these incidents as we head toward election day. Here are just three examples of incidents that we all should remember when considering who should serve us as our next councilperson.

Fugazi told Trisha that each of the victims would receive an equal share of the funds raised. She was instructed to put together a list of items lost in the fire. Keep in mind, Trisha's was the only home completely destroyed in the fire. Being modest, the family made a list of only the most essential needs—remembering the promise Fugazi had made that all families would receive equal support. That's not what happened! The one family who lost the most, ended up receiving the least in funds. When Trisha realized the inequity, she attempted to bring it to the attention of other organizers of the event. That’s when all hell broke loose and the family who lost the most, received the least. You see, just by pointing out what Fugazi had promised her, Fugazi’s attack dogs went after Trisha, the victim.

So what happened here? Why didn’t Fugazi keep her promise? Why was a victim and her family attacked by Fugazi supporters? Calling Trisha ungrateful, and making numerous accusations about her; all the while conducting themselves in very non-neighborly ways. And why didn’t Fugazi publicly tell her supporters to knock it off!?! After all, isn’t that what leaders do? Why is it, we are approaching 4 years of Fugazi being in office and her supporters are still attacking people personally, making racist and homophobic comments; sometimes lying in an attempt to make Fugazi and her peers look better. BTW: these are the same supporters who have threatened physical harm on their opponents, the same supporters that show up drunk at council meetings and threaten people who don't agree with them, and the same supporters who hung a doll in effigy that was dressed up as Assemblymember Susan Eggman. This is the kind of nasty tactics you would find straight outta Trump’s Campaign playbook. Stockton is too small a community for this type of destructive campaigning. In the end we are all neighbors and treating people ugly just shouldn't be tolerated. Especially when these people are survivors of loss, assault or crimes.

If the city we love is ever going to move beyond the political stunts and bullying, we need to take a real hard look at the leaders we elect. We need to make sure our leaders are capable of growing and learning and take the responsibility of being an elected official with grace and class. The work of an elected official is to improve conditions for their constituents. Not bully and attack them.  Ms. Fugazi has proven time and time again that she is incapable of such a feat and thus has not earned the right to be re-elected.

This communication is the first in a series that will be shared over the next couple months. My hope is that these missives will allow certain voices to share their stories. If you think these three stories are unique, you are wrong. And what's sad is, in some of these cases, we are talking about true victims who endured hardship and pain and then found themselves in the crossfire of the type of political destruction that we all thought ended in 2016. My other hope is that we can have healthy discussions about these incidents. I don't want to see people attacking each other personally. These incidents are about a leader and how that leader responds to public matters. This is not a personal witch-hunt. With that, I would like to welcome folks to share their thoughts and contribute to a healthy discussion about the future of our city. Visit spadesj.com to share your thoughts directly with me.